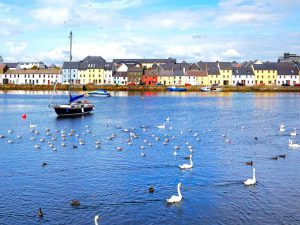 Galway is a holiday haven on the West Coast of Ireland

We love exploring Ireland. If you are thinking of a short break from Manchester then you cannot beat the Emerald Isle.  In a few short weeks we will be in Glorious Galway on the west coast of Ireland. Galway has something for everyone’s. If you are wondering where the craic is then just take a look at the reasons to take a break in Galway.

Galway’s got one of the liveliest pub scenes in Ireland. Step inside the warm wooden nooks and crannies of Tigh Neachtain’s on Cross Street and you’ll happily lose hours listening to traditional irish music whilst sipping a glass of whisky or guinness. Other great spots in the city include Murphy’s and Garavan’s. We will be sniffing out the liveliest spots across the City. Truly enjoy the Craic as talented dancers use the bar as their stage as the fiddlers play a lively tune. 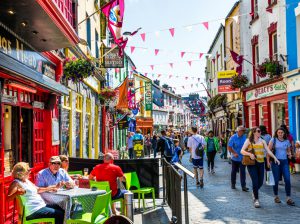 Galway is a foodie heaven. The food scene includes incredible cafés, bistros, traditional pubs and fine-dining restaurants that are kicking the culinary ball right out of the park. The markets give us ample opportunity to sample some homemade delights and haggle for a bargain.

We are fortunate to be based within a few minutes walk of some great restaurants.  We fancy the traditional fayre and music at McSwiggans, as well as trying the Oysters and Seafood Platter in Galway Brasserie on The Corner.  Have you ever dreamed of eating at a Michelin Starred restaurant?  Now is your chance to check it off your bucket list! The award winning Loam is a stone’s throw from our hotel.

Walk along the Beach

Who would have envisaged a beach holiday in Ireland!  We can stroll along the 2km-long sandy promenade at Salthill, and watch the brave (or stupid!) dive from the harbour.   Tradition dictates that you should “kick the wall” at the end of the promenade for good luck. If you don’t fancy that, then why not just grab some fish and chips, sit on the beach and watch the light change over the Atlantic.

The wild beauty of Connemara is just a short journey away, so we can stretch our legs as we discover the castles, beaches and rugged coastline of Connemara. The Connemara horizon is dominated by more than fifty magnificent mountains in four tightly packed ranges, the Twelve Bens, Maum Turks, Partry and Sheffrey. There are various walking routes for all levels of fitness that lead to some hidden gems. 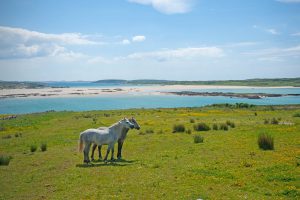 A highlight of Connemara is its wild Ponies

Of course, no one can talk about Connemara without mentioning the free roaming ponies. Horse lovers can ride out in the moorland – even if you have never ridden before. Find out more about these beautiful animals at one of the many studs dotted around Connemara.

Breathtaking Beauty in a Day.

Fancy a day trip? Galway has some of Ireland’s most exciting attractions right on its doorstep. We’re talking the Cliffs of Moher, the Burren, the Aran Islands and the wild beauty of Connemara.  We fancy this trip to the colourful village of Doolin where you can cruise to the Aran Isles, pick up a sweater, and marvel at the Cliffs of Moher on the boat home. 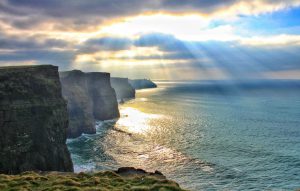 The Cliffs of Moher are breathtaking

Why not join us in Galway?

We are jetting off to Galway from Manchester on Friday 5th April 2019 . Why not come and join us?   Social Circle offers Manchester-based professionals the opportunity to meet new people, try new activities and enjoy short breaks in the UK and abroad. There are no hidden costs and our weekends away are hassle-free. 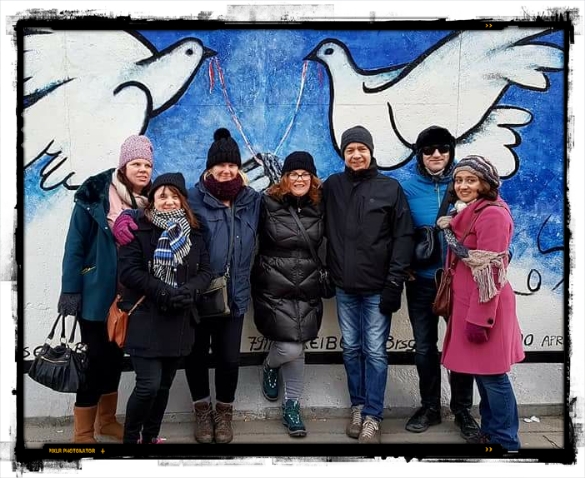 Berlin, the German capital, is renowned for its exceptional variety of attractions, its flourishing cultural scene and a way of life that’s both fast-paced and relaxed. It’s hard to believe that barely a generation has passed since Berliners tore down the Berlin Wall, and since then, the city has resonated with open-mindedness.

In February, Social Circle visited this fascinating City to learn the history of Berlin, grasp some culture and view some of the most beautiful and interesting monuments of Europe.  We caught up with our host, Emma, to find out more about the weekend.

Hi Emma, I believe you volunteered to host the Berlin weekend?

Indeed I did!  Having lived in Berlin, it was amazing for me to be back. I felt really at home and it brought back memories of being 21 there in December 1994. A weekend away gave me enough time to show our Guests the Highlights. I definitely think some of the group would go back again to see more of the city.

Tell us about the Highlights then.

Oh there are so many.  One of my favourite parts of the weekend was the walking tour around the City. We visited Brandenburg Gate, the Memorial to Murdered Jews, Hitler’s Bunker, Checkpoint Charlie & Museum, Gendarmenmarkt, Hackescher Markt and more.  Despite living in Berlin, there was still so much to learn about its history and our guide was very knowledgeable. 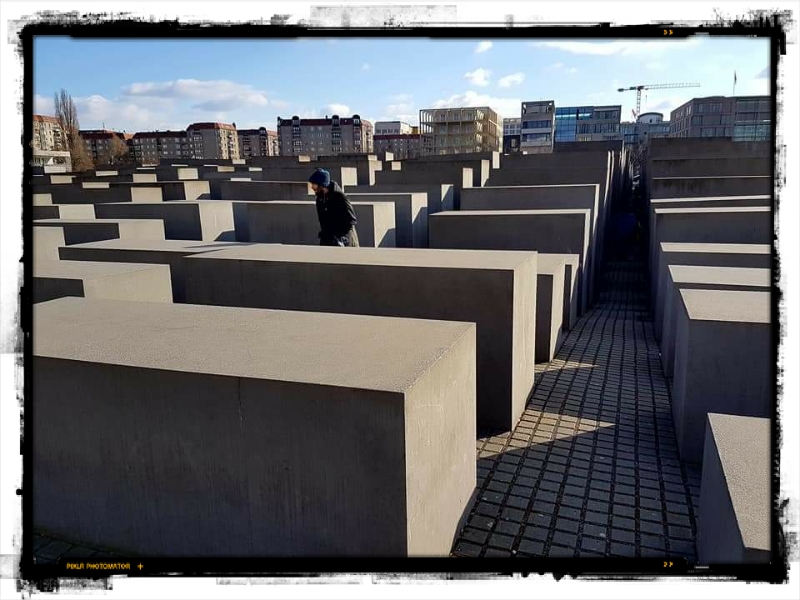 What about the basics? Hotel, flights etc?

We all met at the airport on time, had breakfast and arrived in Berlin  around 10:00. Social Circle HQ had organised the transfers, so we were greeted by our driver at the airport and a short time later we were checked in at the Mercure Hotel Berlin City West.  The Hotel was 4* and near some of the main highlights so it made for a comfortable and convenient stay.

Germany is known for its great beer and food.  Which restaurant would you recommend?

The group would agree that the best meal was definitely Schnitzelei on the Saturday night. It was near the hotel, affordable and had a great selection of craft beers as well as great food – tradition with a twist!

We had planned to visit the Charlottenburg Palace & Gardens , but it was so cold that weekend we agreed it would not be much fun.  I managed to grab us a bargain with the hop-on hop-off City Sightseeing Bus who gave us half price tickets and an extra days touring free.  It was a great opportunity to spend a little more time seeing the Highlights from the walking tour as well as exploring new places, such as the street art in the East Side Gallery. 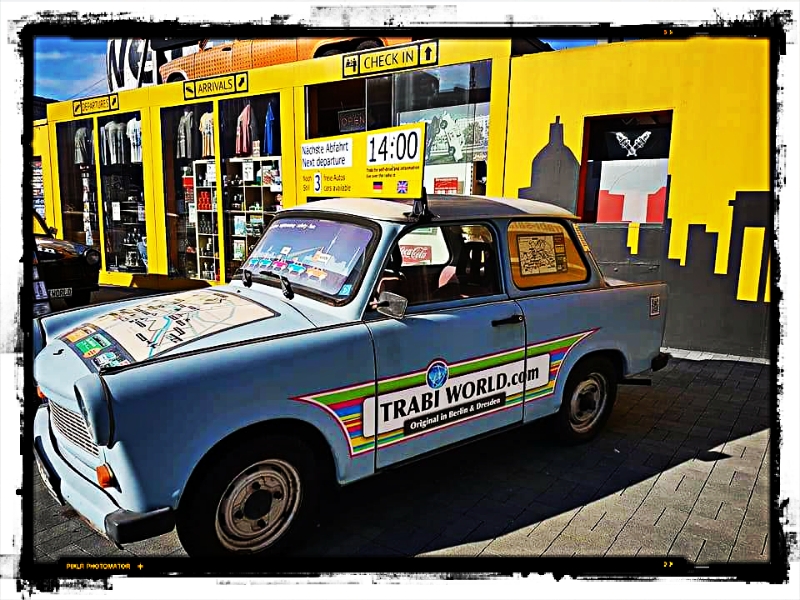 Many Thanks to Emma for Hosting this weekend. But what did our Guests say?

Sarah Hobbs says  “I really appreciated having Emma’s experience and knowledge on this trip. It was a great group and the company was most enjoyable aspect.”

If you love nothing more than getting away for a few days but find it difficult to organise or your friends don’t share your idea of a holiday, we offer the perfect solution. We offer numerous  group holidays with like-minded people each year, to such destinations as Milan and Barcelona. You simply need to click here to book and you’re on your way to Destination Fun!